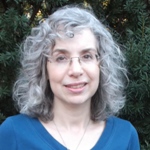 Raima Evan has an M.A. in Creative Writing and a Ph.D in English Literature from the University of Pennsylvania. Her fiction has appeared in Calyx, Philadelphia Stories, and Fifth Wednesday Journal, and her creative nonfiction in Women & Performance and Referential Magazine. Her one-act play was produced at Actors Theatre of Louisville and published in Dramatics Magazine. She is an assistant dean at Bryn Mawr College.