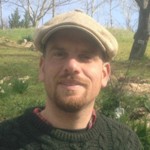 Mitch Ginsburg, a reporter on leave from The Times of Israel and a fiction editor at The Ilanot Review, has translated several works of fiction, including Second Person Singular by Sayed Kashua and The World of the End by Ophir Touche Gafla. He is at work on a novel, from which this is excerpted.