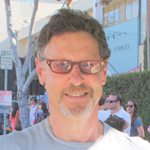 Tom Teicholz is an award-winning journalist who is a contributor to Forbes.com and whose work has appeared in The New York Times Magazine, The Los Angeles Review of Books, The Paris Review, Interview and The Forward.