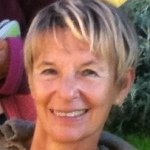 The braying woke her. The same loud, rasping noise had greeted her every morning since her arrival in Tel Aviv two weeks earlier. By now she knew the unfamiliar sound was a donkey’s braying. That first morning in her uncle and aunt’s apartment, she had been convinced it was someone pumping water, or maybe even oil, right under her bedroom window. Why not? Everything was going to be different here in Eretz Yisrael, Sarah smiled to herself. Here, anything was possible.

Ricky Rapoport Friesem, after 25 years as a journalist, filmmaker and ultimately, Head of the Communications Department of Israel’s Weizmann Institute of Science, turned her attention to her first love, creative writing. Her poems and short stories have appeared in numerous journals and have garnered awards both in Israel and abroad. She has published four collections: Parentheses, First Prize Winner in Writer’s Digest International Self-Published Book contest, Laissez-Passer, Reality Check, and a Hebrew collection, Mekurka’at, published by Eked in 2013. Her recent poetry collection, Mumbai Luck, won the Dallas Poets Community 2015 Chapbook Competition. Ricky was born in Calgary, grew up in Toronto, Canada and moved to Israel in 1972.