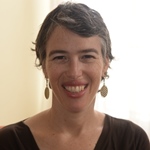 Translated from Hebrew by Shira Atik

I looked around my messy car and giggled to myself. The uncertainty returned that I’d felt at the beginning of my drive regarding the script I wanted to write. Maybe I could adapt the story into a modern film about a rabbi’s daughter from the old country who is overcome by lust and, finding herself in an unwanted pregnancy, is marginalized by her community because of societal norms. That kind of adaptation could be the perfect choice.

Avigail Graetz was born in Israel in 1975 and grew up in Omer, a small town near Beersheva. She has a B.A. in film from Tel Aviv University and a M.F.A from Ben-Gurion University in creative writing. She teaches about "Israeli Society as Seen through Film" for the Overseas Program at Ben-Gurion University and she teaches “Mindfulness” at IDC Herziliya. Graetz wrote four plays that were shown on stage. Her play Ona’at Devarim (Verbal wrongs) was featured at the Akko festival, and her most recent play, In Case I'm Not Around, was performed at the Israel Festival in Jerusalem in 2016. She was awarded the PARDES Fellowship program at the National Library of Israel and also the Jewish National Fund Hebrew Literature Prize (2012), both for her debut novel, A Rabbi’s Daughter. She has published several short stories as well as poetry, and had a weekly column that integrated the “Portion of the Week” with Buddhist philosophy. She is now working on a novel, Mama India, which is set in Israel and Palestine.