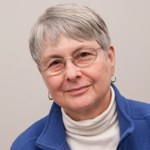 Even now,  on the train, Daphne couldn’t stop thinking about the woman in the painting — her aureole of crimped, light-brown hair, the expanse of pale ochre forehead, the slightly pudgy chin. Her dignity, the golden light, her sadness. The train made a little lurch as it started, a hiccup. Seated, miraculously, after their breathless run through the station, Daphne touched her husband on the arm. It was a big train, not the premium Euro-City Express, but solid, clean, right on schedule. Now she could let go, give herself to the liminal moment of departure, that moment in a public conveyance when the mind races with knowing that a totality, a world, has been left behind. Amsterdam, receding ever faster as the train picked up speed, would soon be as absent as home:  Westmont, Laurel Avenue. No matter: Daphne had the woman.

Naomi Myrvaagnes is the author of The Third Street Temple, a tragicomic novel about a rabbi and her congregation. A Resident Scholar in the Women’s Studies Research Center at Brandeis University, Naomi has written poems, essays, and fiction. Her work has appeared and won awards in publications ranging from the Harvard Review to Onthebus, from the Forward to the Christian Science Monitor. Her midrashic monologue, Rebekah, has been set as a chamber opera by composer Ruth Lomon and was performed at Brandeis in 2013. A recent essay, “The Atheism Spectrum,” in the webzine 614, examines the place of God in the mind and life of Rabbi Felice Whitman, protagonist of The Third Street Temple.