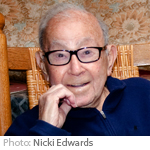 Turning into the drive, the cab pulled up alongside the cars parked at the curb. The rear door opened, and the passenger stepped out into the cold dusk.He did not seem to hurry, but he completed his turn toward the hospital stairs before the car door slammed shut behind him. The flight bag swung from the man’s hand as he mounted the stairs to the main entrance. The people he passed were huddled inside their overcoats. He was wearing lightweight slacks, a loose sports shirt, a windbreaker and shoes that resembled moccasins. He tucked the flight bag close as he reached the revolving doors.

Lester Gorn, a native of Portland, Maine, taught for many years (story lab, world literature) at University of California Extension, Monterey Peninsula College and The San Francisco Black Writers Workshop. He’s the co-author of The Art of the Traditional Short Story, a story collection. In the olden days, he served as book editor and daily columnist of the San Francisco Examiner. He’s a combat veteran of World War II. His novel, The Anglo Saxons, was based on his experiences as the only American C.O. in the Israeli Army during the War for Independence (1948-49). Under the nom de guerre Ben Zion Hagai, he commanded the 4th Troop (Anti-Tank), which participated in every major battle of the Negev campaign.