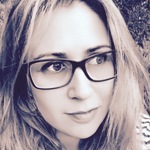 Z, the guru of nobody.

Naya Lekht was born in Ukraine and immigrated to the United States with her family in 1989. She received her Ph.D. in Russian Literature from UCLA in 2013, where she is currently a faculty adjunct. Lekht has published fiction and non-fiction. In addition to working on a book about Babi Yar in Soviet Literature, Naya is currently putting together a short story collection that centers on the tension between collective and individual memory in shaping major historical events.