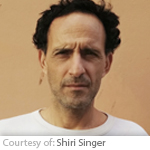 He stands on his two feet facing Bernarda, who smiles the smile of a proud mother, and there is one prayer in his heart, to curl up in the shelter of one of the cardboard boxes, to hide there in the company of the onions and the marrows until the storm passes. But this doesn’t happen. Something else happens: with her perfumed hand, Bernarda takes hold of his withered hand, and pulls it gently, and Ezra has neither the willpower nor the strength to resist, and so he walks with her, and the two of them step with the stately steps of a princess and a president. And bringing up the rear, a procession of all the market people bearing brimming baskets and boxes, and from the street, drivers cheer them with a fanfare of honking horns, and from the opposite pavement children wave with empty bags turned into colorful flags, Hurrah, hurrah. The entourage of the market people advances on a red carpet of squashed tomatoes between the wondering crowds and the laden stalls, and Bernarda makes for the red motorcar in the middle of the road, its engine still humming, and she opens the door for the darling of the marketplace, Mr. Ezra Salim, and helps him to sit down. And the two stalwart bodyguards arrange his baskets and boxes on the back seat, and the silent, riveted audience holds its breath and swallows its saliva as Ezra sits like a Saudi sheik in the front seat next to his driver, the fairest of  women. And she waves her hand in thanks to all the people of the market and the two of them drive away like a royal pair in their carriage, to who knows where.

Copyright © Am Oved Publishers Ltd. Published by arrangement with The Institute for the Translation of Hebrew Literature.

“Magic” is a story from Zemach’s book, The Last Painting of Jacopo Massini.

Zadok Zemach, born in Tel Aviv in 1967, graduated with a BA in geology from the Hebrew University of Jerusalem, then studied theater at Tel Aviv University, writing and direction at the Kibbutzim College, and scriptwriting at the Sam Spiegel Film and Television School. He works as performance manager for the Kibbutz Contemporary Dance Company. Zemach won the Bernstein Prize, 1999, for his play Cracks in the Concrete, which was staged by the Habima National Theater in 2007. His second play, Screwed, was awarded a special prize at the Beit Lessin Theater’s Open Stage Festival in 2007; it was staged in 2011 by the Toma Caragiu Theater in Romania and in 2013 by the Haifa Theater, which also staged a children’s play of his one year later. Zemach is currently writing a script for a feature film. The Last Painting of Jacopo Massini, his first fiction book, was awarded the Ramat Gan Prize for Debut Literature (2015) and the Wiener Prize for Debut Fiction (2015).