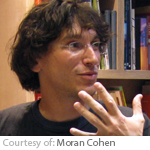 Copyright © Asaf Schurr. Published by arrangement with The Institute for The Translation of Hebrew Literature.

Asaf Schurr was born in Jerusalem in 1976 and has a BA in philosophy and theater from the Hebrew University of Jerusalem. He has worked on the editorial staff of the magazine Kahn for human and animal rights and environmental issues, and as editor for the culture, art and politics website Maarav. At present he is a translator and writes literary reviews for the Hebrew press. Schurr has received the Bernstein Prize (2007), the Minister of Culture Prize (2007) for Amram, and the Prime Minister's Prize (2009). His second novel, Motti, was a finalist for the Sami Rohr Prize (USA, 2013).