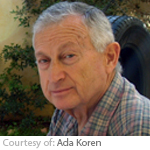 Yeshayahu Koren was born in Kfar Saba, Israel, in 1940, and currently lives in Zichron Ya'akov. He studied philosophy and Hebrew literature at the Hebrew University of Jerusalem and began publishing short stories in the early 1960s. Koren has published collections of stories and novellas, and a novel. He was awarded the Bialik Prize (2008) and the Brenner Prize (2013) for Two Palms and a Word.