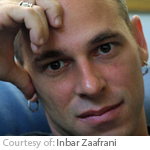 Translated from Hebrew by Shira Atik

Copyright © Gadi Taub. Published by arrangement with The Institute for The Translation of Hebrew Literature.

Gadi Taub, born in Jerusalem in 1965, holds a Ph.D. in American History from Rutgers University, and teaches at the School of Public Policy and the Department of Communications at the Hebrew University of Jerusalem. He also writes an op-ed column for Israel's largest daily,Yedioth Ahronoth, appears regularly on Channel 10 TV's political talk show, and is a frequent contributor to American and European newspapers. Taub has published fiction, non-fiction and a number of children's books. His book, The Settlers and the Struggle Over the Meaning of Zionism was published by Yale University Press in 2010. A TV series based on his Bestselling novel Allenby Street was a hit on Israeli TV in 2012, and was nominated for Best TV Drama, and Best TV Screenplay at the prestigious FIPA Festival in Biarritz 2013. Taub has received the Ze'ev Prize (2000), the Publishers Association's Gold Prize three for three of his books (2008; 2009) and the Publishers Association's Platinum Prize for Allenby (2013).