The Minister of Rain 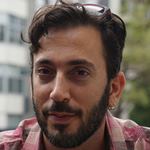 The Minister of Rain

Beni’s shout roused the children like a siren. Within seconds, as if they had practiced this scenario daily, the children abandoned whatever they were doing and stampeded to the door. Cards were left on tables, orphaned dolls and cars littered the floor, the TV screen flashed with pictures unseen by any eye and the dress up nook’s floor was paved with vibrant dresses, like puddles of colour.

Gabriel Saul was born and raised in a small kibbutz in the north of Israel, the son of Mexican Jewish immigrants. He has lived in New York where he studied Creative Writing and Communication in Hunter College. He has a BA in English Language and Literature from Haifa University in Israel. He currently resides in Sydney, Australia. Apart from a couple of college magazines this is his first publication.