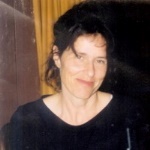 “Putting on a few pounds there, kid,” Uncle Saul said, looking me up and down. “A few too many latkes, I see.” He shook his head. “It’s not even Chanukah yet.”