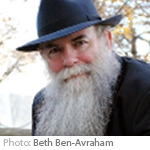 Passing through the gates on his way out of the cemetery, the lawyer felt a slight movement of the earth, one of the many small tremors which frequently occur in the province of Buenos Aires. What he did not know was that the tremor had caused the coffin of Isaac Parness to shift, ever so slightly. The coffin now rested in a position such that if one were to draw a line from the exact center of its head through the exact center of its foot, and, following the curvature of the earth, continue it in a northeasterly direction, the line would pass over the Atlantic Ocean, several countries in northwest Africa, the Mediterranean Sea, and, in Europe, over a forest on the outskirts of a small town in south-central Poland, beneath the soil of which, along with those of many others, lay the bones of Rosa Levine.

Copyright © Gershon Ben-Avraham 2016
Gershon Ben-Avraham holds an MA in Philosophy (Aesthetics) from Temple University where he studied with Monroe Beardsley. His poetry and short stories have appeared in both online and print journals including Apollo’s Lyre, Bolts of Silk, Both Sides Now, Numinous: Spiritual Poetry, Poetica Magazine: Contemporary Jewish Writing, Poetry Pacific, and The Jewish Literary Journal. He lives with his wife Beth and Kulfi, the family collie, in Beersheba, Israel.