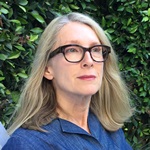 The screeching canaries, the yelping Pekinese, the squawking parrots, and the whining cats vied for Elsa’s attention. Henry had given up. He made his escape past the caged guinea pigs, the fishpond, the gate on which hung sacks of stale bread left by thoughtful neighbors, to the shelter. Here, he kept and tended the Giant.