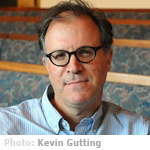 Ilan Stavans is Lewis-Sebring Professor in Latin American and Latino Culture at Amherst College. His books include the memoir On Borrowed Words (2002), The Disappearance: A Novella and Stories (2006), the graphic novel El Iluminado (2012), and the fotonovela Once @ 9:53 am (2016). He is the publisher of Restless Books.