Lettering and the Art of Living 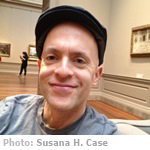 Lettering and the Art of Living

Yermiyahu Ahron Taub is the author of four books of poetry, Prayers of a Heretic/Tfiles fun an apikoyres, Uncle Feygele, What Stillness Illuminated/Vos shtilkayt hot baloykhtn, and The Insatiable Psalm.  Tsugreytndik zikh tsu tantsn: naye Yidishe lider/Preparing to Dance: New Yiddish songs, a CD of nine of his Yiddish poems set to music, was released in 2014.  He was honored by the Museum of Jewish Heritage as one of New York’s best emerging Jewish artists and has been nominated four times for a Pushcart Prize and twice for a Best of the Net award.  Please visit his website at www.yataub.net.