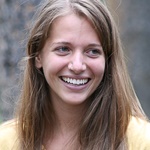 Noa Silver was born in Israel, and grew up between Scotland and Maine. She received her BA in English from Harvard University. She is currently pursuing her MFA in Creative Writing at San Francisco State University, and working on her first novel.