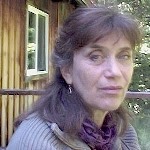 Copyright © Beth Bosworth 2016
Beth Bosworth is the author of The Source of Life and Other Stories (University of Pittsburgh Press), for which she received the 2012 Drue Heinz Literature Prize. Her other books are the novel Tunneling (Crown) and a debut story collection, A Burden of Earth (Hanging Loose). Her work has appeared also in the Kenyon Review, AGNI, Guernica, and elsewhere. She teaches English at Saint Ann’s School in Brooklyn and edits the Saint Ann’s Review.