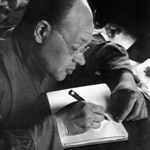 (A sketch and two stories from the book)

Translated from Russian by Boris Dralyuk

English translation © Boris Dralyuk. Published by Pushkin Press, November 15, 2016 (United States and Canada).
This sketch and two stories are part of the book, Odessa Stories, which can be purchased here.
Isaac Babel (the author) was a short-story writer, playwright, literary translator and journalist. He joined the Red Army as a correspondent during the Russian civil war. A friend and protégé of Maxim Gorky, he was the first major Russian-Jewish writer to write in Russian and was hugely popular during his lifetime. Despite his popularity, his critical portrayal of the Cossack army in Red Cavalry, also published by Pushkin Press, made him significant enemies within the Soviet establishment. He was murdered in Stalin's purges in 1940, at the age of 45.
Boris Dralyuk (the translator) is an award-winning translator of several volumes of poetry and prose from Russian and Polish, and co-editor, with Robert Chandler, of the Penguin Book of Russian Poetry, published in February 2015. He also translated Babel’s Red Cavalry and is the editor of 1917: Stories and Poems from the Russian Revolution, forthcoming from Pushkin Press.