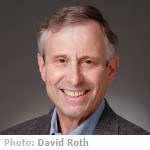 Then the High Holidays arrived: the time of repentance, renewal, and forgiveness, two years since the holiday season that precipitated their separation.  With Birnbaum gone, there were only two remaining kohanim to do the afternoon Yom Kippur duchening. Still, it was a stirring moment.  After a break, toward evening the congregation reassembled for the closing service. In the final moments of Yom Kippur, as the Heavenly gates are closing, comes the dramatic final blowing of the shofar. In their little synagogue the shofar blowing was to be done by the cantor, as had been the custom for many years. But this year the aging cantor, weakened by his fast and by his emotional efforts on behalf of the congregation over so many hours, ran out of gas. He raised the shofar to his lips and blew with all the force he could muster, his veins bulging, his face a beet. But hiss after hiss was the only result. He was humiliated, and the congregation agonized along with him. Suddenly Howard rushed forward, his embouchure now a powerhouse and his lips full of steel, thanks to his many hours of trombone practice. He gently relieved the cantor of the shofar, raised it to his lips, and produced the most powerful and extended blast of the shofar since Joshua brought down the walls of Jericho. Sadie, her heart swelling with rapture, was heard to say “Oh, Howie, my dear” as she fainted and fell to the floor. This time it was Howard who came to her rescue.
Copyright © Larry Gerstein 2016
Larry Gerstein, a mathematician, has written mathematics books and research papers, which he hopes were nonfiction. “Religious Studies” is his first published piece of fiction. He grew up in New Hampshire, went to Columbia for college and Notre Dame for graduate school, and then moved to Santa Barbara, where he and his wife live. His writing is part of his desperate attempt to keep up with the creative output of their two sons, who live in New York. He is an amateur musician, and he plays violin and trombone in assorted music groups.