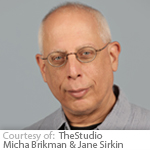 Translated from Hebrew by Joanna Chen

Nizan Weisman was born in Haifa in 1956, and lives there with his family. He first studied philosophy and history of theater at the Hebrew University of Jerusalem, and later graduated in economy and financial accounting. For the last 30 years he has worked as a lecturer and business consultant for Israeli and global companies. Weisman's short stories have been published in a number of literary periodicals in Israel. Rosemary Woods, his first collection of stories, won the Haifa Foundation Award (2006) and was a finalist for the prestigious Haaretz Competition for Debut Fiction (2007). Israeli Breakfast is his second collection of stories.