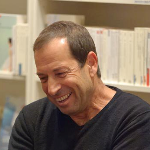 Benny Barbash was born in Beersheva in 1951, and currently lives in Tel Aviv. He served in the IDF for 11 years and sustained serious injuries in the Yom Kippur War. Barbash holds a BA in history from Tel Aviv University. During the 1980s and 90s, he was a leading figure in the Peace Now movement, and was involved in many initiatives, both local and international, to further Israeli-Palestinian dialogue. He has written fiction, plays and screenplays, including the script for Beyond the Walls, a landmark in Israeli cinema which won several international prizes. Barbash has received the ADAI-WIZO Prize (Italy, 2006) and the "Public's Favorite" Prize for My First Sony (Paris, 2008).