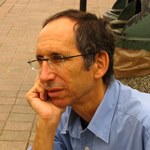 When she nodded her head, her eyes were full of tears.

Haim Lapid, writer, scriptwriter and social psychologist, was born in Ramat Gan, Israel, in 1948. He studied psychology at Tel Aviv University and has taught social and behavioral psychology. At present, Lapid lectures on negotiation theory and is an organizational consultant for hi-tech companies. He also teaches screenwriting at the College of Management and holds writing workshops. Lapid was awarded the Prime Minister's Prize in 2002.