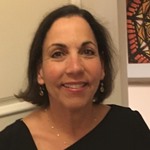 The worst part of dying,   Hanna thought as she settled into the theater’s cool darkness, was never again being able to watch a movie. It was hard to imagine, all of Hollywood, gone from the screen forever.