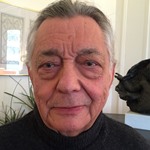 It wasn’t nostalgia; it wasn’t even the torture of old grief; he didn’t know what precise etiology it had, but it hurt all the more for its elusiveness. And so, as if to give a physical presence, an exact place in the world to his pain, Immerman squeezed hard the corners of his father’s cross.

G.Y. Dryansky is a longtime American resident of Paris, author of novels and screenplays written separately and also together with his wife, Joanne. Their Fatima’s Good Fortune and Satan Lake, having been published in numerous countries, have been optioned to become a TV series in France. “Immerman(n)’s Diaspora” is his first short story.