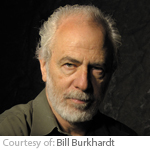 So she joined the long march of refugees east and south, away from the fighting, across the shelterless plains and the frozen Dneister River, to Bucharest, where she sold the pistol and where the landsleit of her little town had set up an agency. Then to America, and the dank tiled halls of Ellis Island, to the giant husband who looked like Carl Sandburg, to the shop and the daughters, to the Lincoln Center.

Richard Slotkin is Olin Professor of American Studies (Emeritus) at Wesleyan University. He is best known for a trilogy of scholarly books on the myth of the frontier in American cultural history. Regeneration Through Violence (1973) was a National Book Award Finalist, and received the American Historical Associations Beveridge Award. The Fatal Environment (1985) received the Little Big Horn Associates Literary Award. Gunfighter Nation (1992) was a National Book Award Finalist. Lost Battalions, about immigrant soldiers in WW I, appeared in 2005. He has also published three historical novels. Abe (2000), awarded the Shaara Prize for Civil War Fiction; The Return of Henry Starr (1988); and The Crater (1980).