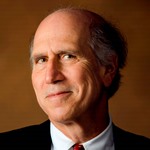 As the swine boy laughed, his fat red face doubled in size; a hiss steamed from it like a hot water bottle. He was about to explode. Edward could not help it: he laughed and laughed – such was his sorrow, his sacrifice. Mr. Kolansky danced, dodging cans, gray hands twirling in sacred ritual above his head.

Joseph Bathanti is former Poet Laureate of North Carolina (2012-14) and recipient of the 2016 North Carolina Award in Literature. He is the author of ten books of poetry, including Concertina (Mercer University Press, 2014), winner of the 2014 Roanoke Chowan Prize; and, his most recent volume, The 13th Sunday after Pentecost (LSU Press, 2016). He is the author of four books of fiction, including The Life of the World to Come (University of South Carolina Press, 2014). Bathanti teaches at Appalachian State University in Boone, NC, where he also serves as the University’s Watauga Residential College Writer-in-Residence.