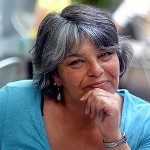 Natasha Lvovich is a writer and scholar of multilingualism and creativity and literature written in non-native language. Originally from Moscow, Russia, she teaches at City University of New York and divides her loyalties between academic and creative writing. She is the author of a collection of autobiographical narratives, The Multilingual Self, and of a number of articles, essays, and innovative mixed genre pieces. Her creative nonfiction appeared in journals (Life Writing, New Writing), anthologies (Lifewriting Annual, Anthology of Imagination & Place) and literary magazines (Post Road, Nashville Review, Two Bridges, bioStories, NDQ, Epiphany, New England Review, and Hippocampus Magazine). She has been nominated for a Pushcart Prize.