Blessed is the Memory 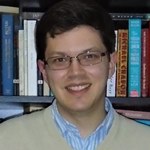 Blessed is the Memory

J.L. Wall lives in Ann Arbor, Michigan, where he is completing a Ph.D. in English and Judaic Studies and teaches writing.  Born in Louisville, Kentucky, he studied Classics at Northwestern University. He has studied Yiddish, published academic articles on Jewish poetry, the novels of William Faulkner, and assorted book reviews, and spends too much time worrying about the Chicago Cubs. “Blessed is the Memory” is his first published work of fiction.