A Brief Introduction to Tomorrow 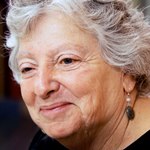 A Brief Introduction to Tomorrow

Rose Rappoport Moss was born in South Africa and has lived in Massachusetts since 1964. She has taught at a number of colleges and universities in Massachusetts. This story draws in part on her teaching at the Nieman Foundation for Journalism at Harvard and in part on a visit to Lithuania three years ago. She has published novels, stories and non-fiction and some of her work has been translated into Spanish. She is currently curious about food and memory. www.rosemosswriter.com.