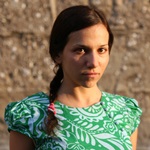 Dea Hadar is an award-winning writer and journalist who lives in New York. She is the author of two critically acclaimed Hebrew books: Numi Numi, Isawiya (a collection of short stories) and Etzlenu Achshav Boker, a novel about a dysfunctional family of Israeli immigrants in Manhattan in the 1980s. In 2012, her novel was awarded the Am HaSefer translation grant by the Israeli Ministry of Culture and the Yehoshua Rabinowitz Foundation of the Arts. She worked at Haaretz newspaper for twelve years as magazine writer, TV critic, and personal columnist, with foreign assignments in Guantanamo Bay, Turkey, and other places. Her short stories have been translated and published in several Spanish anthologies and in a bilingual Arabic-Hebrew anthology (“Two”/“Shtayim”). Her non-fiction story, “Farewell, Anne Frank,” was recently published in English. She studied journalism and international relations at the Hebrew University in Jerusalem.