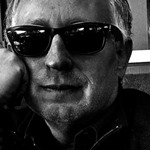 K.D. Alter lives in the United States. He can be contacted at kda2433@yahoo.com.