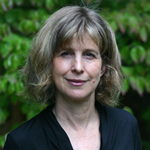 Marjorie Sandor is the author of four books, including the linked story collection Portrait of My Mother, Who Posed Nude in Wartime, winner of the 2004 National Jewish Book Award in Fiction. Her essays and stories have appeared in the Best American Short Stories, America and I: Stories by American-Jewish Women Writers, and elsewhere.  “The Secret Music” is an excerpt from a novel following a gifted young musician of Jewish descent living through the early years of the Spanish Inquisition. Marjorie lives in Corvallis, Oregon, and teaches creative writing and literature at Oregon State University.