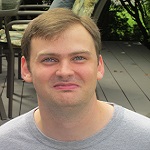 Jonathan DeCoteau is the author of The Naked Earth, winner of a 2007 Indie Excellence Award, and named 2008 Fiction Book of the Year by The Online Journal of News and Current Affairs. His work has been published in Longshot Island Magazine, Literally Stories, Reader’s Quarterly, Farther Horizons Than These, and Far Horizons.