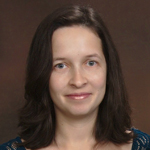 Maria Lazebnik is a writer, educator and research scientist based in Boston, MA. In 1996, when Maria was fifteen, she and her family emigrated from Nizhny Novgorod, Russia to the United States as Jewish refugees. While in Russia, Maria studied piano and musicology. “The Flute Maker” is inspired by her love of classical music. Dr. Lazebnik received her B.S./M.S. in Biology and Neuroscience from Brandeis University, and a Ph.D. in Genetics from Tufts University. At Tufts, Maria was an Editor of SacklerInsight, a graduate student newsletter. She completed her postdoctoral fellowship at Harvard Medical School. She has a number of publications in professional journals. In 2012, she received an award from Grub Street, a creative writing center in Boston. Presently, she is an Adjunct Professor at Bentley University. She lives with her husband and three children.