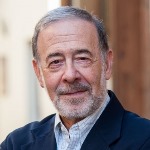 David G. Roskies, a native of Montreal, Canada, is a cultural historian who has published extensively on modern Yiddish storytelling, Jewish responses to catastrophe, Holocaust literature, and memory. His Yiddishlands: A Memoir (2008) was translated into Hebrew and Russian. Roskies teaches Yiddish and modern Jewish literature at the Jewish Theological Seminary and the Hebrew University of Jerusalem. In 1981 (with the late Alan Mintz), he cofounded Prooftexts: A Journal of Jewish Literary History, and served for eighteen years as editor in chief of the New Yiddish Library. He was elected to the American Academy of Arts and Sciences in 2012.