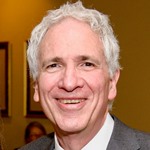 Ken Schept spent the early part of his career as a business journalist writing about developments in retailing, both in North America and abroad. Since embarking on a freelance career, his clients have included the American Jewish Committee, for which he developed a Thanksgiving “haggadah” for Americans to celebrate their diverse roots and shared values. He also collaborated on a book commemorating AJC’s centennial. He received his MFA from Columbia University. The Crimson Cap” appears as a chapter in a recently completed but not yet published debut novel.