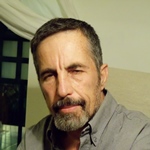 Translated from Hebrew by Michael Sharp

Youval Shimoni was born in Jerusalem in 1955. He studied cinema at Tel Aviv University and first began publishing in 1990. Shimoni is a senior editor at Am Oved publishers; he also teaches creative writing at Tel Aviv and Haifa Universities. He has been awarded the Bernstein Prize (2001), the Prime Minister's Prize (2005) and the Brenner Prize for The Salt Line (2015).