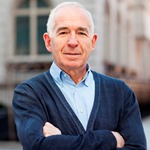 Translated from German by John Howard

Peter Sichrovsky is an Austrian journalist, author of eighteen books, and former member of the European Parliament (1996–2004). In 1989 he co-founded Austria’s liberal newspaper Der Standard, where he served on the editorial board for several years. One of his many acclaimed books is Born Guilty: Children of Nazi Families, based on interviews with children of high-ranking Nazis who themselves suggested the book’s title and which was adapted into fifteen foreign-language theatrical works. Sichrovsky has been a correspondent for Stern Magazine, the Sueddeutsche Zeitung, and Profil. Currently he writes for the online magazine Schlaglichter, where he is a widely read columnist.