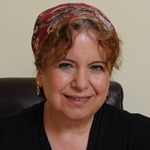 Translated from Hebrew by Anthony Berris and Linda Yehiel

Emuna Elon was born in Jerusalem to a family of rabbis and scholars, and was raised in Jerusalem and New York. She teaches Judaism, Hassidism and Hebrew literature, and has served as advisor to the Prime Minister on the status of Israeli women. She also wrote a weekly political column in the mass circulation daily, Yedioth Ahronoth, and later in Israel Hayom. Elon has published essays, short stories, popular children’s books and a number of bestselling novels. Her novel If You Awaken Love was a finalist for the National Jewish Book Award (2007). Elon received the Book Publishers Association’s Gold Book Prize (2010) for her novel Inscribe My Name, the Aminach Prize for Beyond My Sight (2014) and the Prime Minister's Prize (2015).