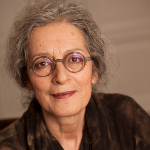 Translated from Danish by Nina Sokol

Birte Kont (the author) is the former chief editor of the Danish Jewish Community’s monthly magazine, as well as a writer and woman of letters. Using her Master’s thesis on Franz Kafka as her point of departure, she wrote  Kafka’s Guilt Identity: a Modern Jewish Skeptic Wrestles with the Law, which was published in 2002, and she received a work grant in 2000 and in 2003 from the Danish Arts Council for cultural essay writing. She has participated in, among other things, the Kafka’s Matliary Festival in 2008 in Slovakia, where she gave lectures, as well as in the Kafka Marathon in LiteraturHaus in Copenhagen in 2009. She debuted as a fiction writer in 2011 with the novel  En by i Rusland (A Place Nowhere), and in 2012  received a work grant from the Danish Arts Council for fiction writing. The novel was re-published in 2015 as an e-book. She is a member of the board for Fiction Writers in the Danish Writers Guild.

Nina Sokol (the translator) is a poet and translator in the midst of translating novels, short stories, plays and  poems by Danish writers. She was a grant poet-in-residence at The Vermont Studio Center in 2011. She has received several grants from the Danish Arts Council to translate plays, including a play written by the fairy tale writer H.C. Andersen which was published by the journal InTranslation. She has also translated an excerpt from one of the winning novels of last year's EU Prize for Literature (Danish, 2016) as well as translated such authors Niviaq Korneliussen and Bjørn Rasmussen. Her own poems have appeared in American journals, including Miller's Pond and the  Hiram Poetry Review, and a collection was published by Lapwing Publications in Belfast, Ireland (2015).