Land of the Lost Daddies 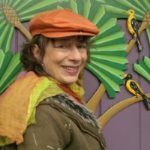 Land of the Lost Daddies

We drove as far as we could and parked. It was a bony, accusatory finger of land hidden in Pacific Ocean fog. On either side of the road were sheep and cattle ranches belonging to the descendants of California railroad barons. We saw dwarfed deer drinking at water holes ringed with bright green grasses and patches of pink and purple wildflowers. As we watched, a giant hawk swooped down and carried away a tiny deer in its claws.

Harriet Rohmer is the founder and former Publisher of Children’s Book Press, the pioneering publisher of bilingual/multicultural picture books (now an imprint of Lee & Low). Her fiction has appeared in The Distillery, Jewish Women's Literary Annual, Louisiana Literature, The Louisville Review, Lullwater Review, The Orange Coast Review, Pacific Review, Passages North, Red Wheelbarrow, Riverwind, Zeek, Everyday Fiction and Flash Fiction Magazine. Harriet is also the author of Heroes of the Environment (Chronicle Books). “Land of the Last Daddies” is part of a novel in stories called Last of the Refuge Cities, inspired by Harriet’s participation in a Midrash group at Congregation Beth Sholom in San Francisco.