The Search for Ernesto Gonzales 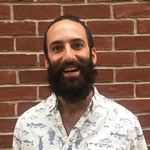 The Search For Ernesto Gonzales

Jacob Frommer is a writer living in Hoboken, New Jersey. He is a founding member of the Manhattan Herring Club and is interested in the busy corner where Judaism, observance and tradition meet. Due to his beard, he is often mistaken for a Haredi Jew, an unintended and fruitful confusion. He attended the Ramaz school and University of Maryland, and intends to get a master’s degree in creative writing. He has written for Altar Journal and The Forward, and is honored to be a part of Jewish Fiction .net.