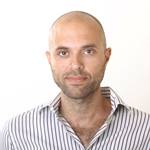 This story is dedicated to Luiza.

Copyright © Shay Aspril 2019
This story was previously published in Hebrew, as part of Aspril’s debut collection of short stories, Soon Winter Will Begin.

Shay Aspril was born and resides in Tel Aviv. He studied law at Tel Aviv University, and has worked as an attorney, journalist and editor. His story collection, Soon Winter Will Begin, was published in Israel in 2012 by Hakibbutz Hameuchad Publishers, and won the Ramat-Gan Literary Award for best debut book. His novel, Fist, was published in 2016 by Zmora Bitan Publishers. His third book, The Judge, was recently published by Am Oved Publishers.