One Good Deed, And Another 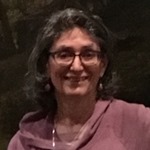 One Good Deed, And Another

I don’t know if Simon heard me. He was pacing under the elevated F train, a silhouetted figure shadowed by the flickering sun. The train sped into the station. I stepped aside as passengers hurried out. The doors of the subway car remained open as I entered and located a vacant window seat.

G. Evelyn Lampart is a clinical social worker. She has served clients for the city of New York for decades, with an appreciation for the opportunities to work with people in helpful and positive ways. Presently retired, and with unfettered time, she has participated in a smorgasbord of writing classes, workshops, and conferences. Her work has been published in several print and on line magazines. In the summer of 2017 she attended the Napa Valley Writers’ Conference, and she was accepted to Bread Loaf in Sicily/September 2018. In addition Evelyn leads an art workshop in a mental health clinic. In that capacity she is able to express three of her facets: social worker, visual artist, and survivor of psychiatric stays. She is a native New Yorker, and a life-long resident of Brooklyn.