The Goodness of Our Fathers 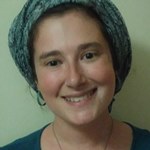 The Goodness of Our Fathers

Sarah Marx Levin’s work has been featured in Tablet, Mosaic, and Hevria, among other outlets. A recent alumna of St. John’s College (Maryland), she works as a freelance writer and editor. She is currently among the inaugural class of students at the Drisha Institute’s Yeshiva, an intensive program of advanced Torah study for young Orthodox women. She lives in Rosh Tzurim, Israel, with her husband and a flourishing herb garden.