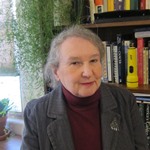 Devastated, expecting the worst to happen, he turned to leave and saw his granddaughter in the doorway.

A native New Yorker, journalist Jane Salodof MacNeil lives in Santa Fe, New Mexico. She holds a B.A. from the City College of New York and an M.A. from Teachers College, Columbia University. Since retiring as a senior editor for the International Medical News Group, she has completed two novels: Throwaway People: Let’s Test Granny to Death (a satire) and Gossamer (a 20th-century retelling of the story of Joseph and His Brothers). She wrote “The Night Light” a quarter century ago and is dismayed by its immediacy.