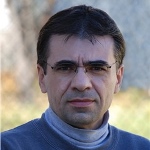 It is Friday again. I sit at the kitchen table, flipping a book of matches between my fingers, waiting for the sun to go down, to light my candles. All five of them.

Joseph Baran is a writer and poet, industrial designer by profession, residing in New Jersey. His work in progress is a Holocaust novel inspired by his family’s recollections. His writing has appeared online and in print in People Holding and Peacock Journal. For thirty years, he has been a contributor at Goodwill Rescue in New Jersey, aiding the homeless and individuals struggling with substance abuse. For twelve years, as a private endeavor, Joseph has offered support to LGBTQ persons, eventually writing a fictionalized short story about his experience. Recently, he has become involved with St. Jude Children’s Research Hospital of TN, and JDC of New York. Joseph enjoys running, cycling, photography and painting. He is on Twitter at @josephjoebaran, and on Facebook at @JosephBaranWriter.